Boat fabrics used in the production of pontoons divides into 3 different categories: Polyvinyl Chloride (PVC) fabrics, Hypalon® fabrics or Polyurethane (PU) fabrics. All 3 boat fabrics are made by a coating polymer (PVC, Hypalon or PU) together with a supporting fabric; polyamid (Nylon) or polyester. All boat fabrics can be found with both types.

Polyvinyl chloride, commonly abbreviated PVC, is a widely used thermoplastic polymer. PVC can be made softer and more flexible by the addition of plasticizers, the most widely used being phthalates. In this form, it is used in clothing and upholstery, and to make flexible hoses, tubing and of cause pontoons.

The plasticizer in PVC has the great disadvantage that it in time (and especially when exposed to UV-radiation) decomposes and leaves the pontoon fabric hard, crisp, and mechanically much weakened. Stories of pontoons that ‘rotten in the sun’ are stories of old PVC pontoons exposed to sun.

Fabrics made by PVC are hard to joint, you can only use a single cure adhesive, which is PU ester. Some manufacturers use high mechanical pressure, high frequency welding or electronically welding, which makes mass production of boats possible in a large scale with machinery and inexperienced labour.

PVC fabrics are produced in a larger palette of colors than fabrics made of Hypalon® and Polyurethane. PVC is considered the poorest material for pontoon production and is mainly used in cheap mass-produced boats.

The following RIB manufacturers that use PVC:

¹: Certain models can be delivered in Hypalon®.

²: Certain models can be delivered in Polyurethane.

³: Certain military models can be delivered in Hypalon®.

Hypalon is a trademark for chlorosulfonated polyethylene (CSPE) synthetic rubber (CSM) noted for its resistance to chemicals, temperature extremes, and ultraviolet light.

Along with PVC, it is one of the most common materials used to make inflatable boats. Hypalon has become the common name for all kinds of CSM.

Hypalon® has demonstrated long life in harsh environments and is known for its air tightness and resistance towards different chemicals among others oil pollution.

Hypalon® fabrics is made of layers of polyester or polyamide and supplied with an internal layer of neoprene. Hypalon® has throughout the years proven to be a reliable and solid material for RIB pontoons.

Hypalon® is considered the second-best pontoon material. However, it is used by many manufacturers as it is technically easier to produce boats with Hypalon® fabric than Polyurethane fabric.

The following RIB manufacturers use Hypalon®:

¹: Brig normally use PVC, but certain models can against a surplus be delivered in Hypalon®.

²: Zodiac normally use PVC (Strongan®), but in military boats and in some professional boats Hypalon® is used.

Polyurethane, commonly abbreviated PU. Polyurethanes are in the class of compounds called reaction polymers, which include epoxies, unsaturated polyesters, and phenolics.

100% Polyurethane material offers four times the abrasion resistance and greater tear or tensile strength compared to Hypalon® and much stronger than PVC.

Polyurethane fabrics have excellent welding properties. Both hot air/pressure rotary Welders and Radio Frequency Welders can be used to join the material together in a molten state, thereby creating an incredibly strong bond.

The combination of the elastomeric properties of Urethane and the resiliency properties of nylon allows the material to repeatedly stretch and still recover to show its original properties.

Polyurethane was originally manufactured in the early 70’s as fuel cell bladders for helicopter fuel for military use and has proved to be the ideal material for boat pontoons.

The following RIB manufacturers use Polyurethane:

²: Marketed under the name Akron-TPE®.

³: Has in 2007 started manufacturing certain boats over 6 meter in Polyurethane, under the name Sharc® Duotex®.

Test of the abrasion and puncture resistance of the materials

Test of PVC, Hypalon® and Polyurethane regarding the abrasion and puncture resistance shows that Polyurethane is superior to both. 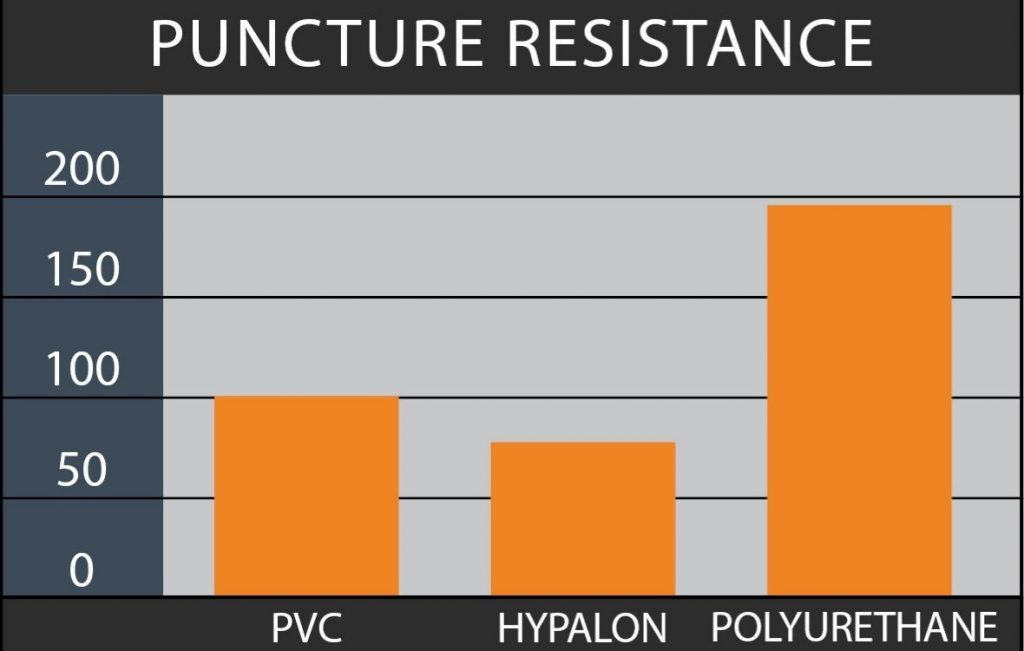 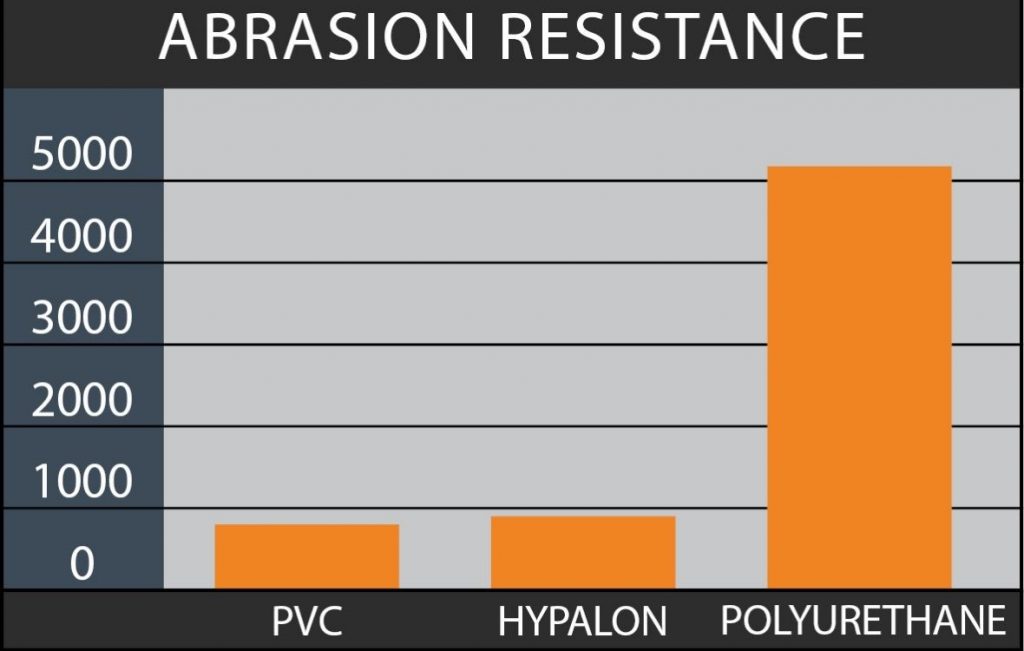 In 1993 the U.S. Navel Surface Warfare Center did a study on polyurethane and the advantages of using it for Rigid Inflatable boats.

“…Polyurethane is more correctly defined as an elastomer, meaning, it can be repeatedly

are often subjected to major stresses during wave impact.”

dive further into our Tornado RIBs

All our boats are 100% customized. We build the boats according to the customer’s wishes. We also want to build the perfect boat for you. And as you just read, the PU fabric gives the Tornado a fantastic durability. Dive into our universe and do not hesitate to contact us!